CUSTOM REQUEST: She is talking to the camera as if it were her boyfriend. She says “you want to try to handcuffs on me? You think that would be fun?” She pretends he tries to put them on and she is fighting with him and pins him. She turns him over and she takes the handcuffs and talks like she is handcuffing his hands behind his back. She flexes teasing him about how she bet him. She teases him about losing and tells him she has a surprise for him. She gets a chastity devise, yanks down his shorts, and locks it on him all the time telling him not to struggle since he is handcuffed and can not do anything about it. She teases him how cute it looks. She teases him with the key. She tells him she is leaving for a minute and for him not to leave but she tells him he probably would not since he was naked, cuffed and with a chastity device he probably would not want anyone to see him. When she comes back she has some tape and a rope and says she put the key where he could never find it and when she uncuffs him he better be good or he will never get the key. She makes him get on his knees and beg to be uncuffed. She tells him that was not good enough and teases his mouth shut. She laughs at him as he wiggles around to try to get the device off. she tells him how stupid he looks being naked, handcuffed and gagged. she tells him she is gooing out and ties his feet together so he will still be there when she gets back. she reaches under the camera as if she is playing with the chastity device and tells him he got himself into this situation and then she leaves. 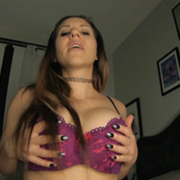 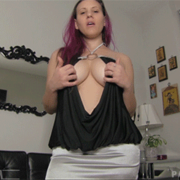 Villainess VS. The Rent-a-cop 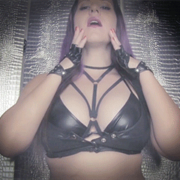 You’re Only Punishing Yourself
Scroll to top